Chartered in 1894, Lexington Council 94 has served Lexington, and the surrounding communities for over a century. Providing significant charitable contributions to our Churches, Children of Special Need, and the community at large.
We are located at 177 Bedford Street, in one of the oldest and most historic commercial buildings in the Town of Lexington. Purchased in the mid 1960’s, and after several major reconstruction projects, we now house commercial tenants along with our own operations, the Lantern Lounge and Heritage Hall. The revenues and receipts from these operations are the major source of funds utilized to continue and enhance our community activity.
Thanks to the efforts of Father Michael J. McGivney, assistant pastor of St. Mary’s Church in New Haven and some of his parishioners, the Connecticut state legislature on March 29, 1882, officially chartered the Knights of Columbus as a fraternal benefit society. The Order is still true to its founding principles of charity, unity and fraternity.
The Knights was formed to render financial aid to members and their families. Mutual aid and assistance are offered to sick, disabled and needy members and their families. Social and intellectual fellowship is promoted among members and their families through educational, charitable, religious, social welfare, war relief and public relief works.
The history of the Order shows how the foresight of Father Michael J. McGivney, whose cause for sainthood is being investigated by the Vatican, brought about what has become the world’s foremost Catholic fraternal benefit society. The Order has helped families obtain economic security and stability through its life insurance, annuity and long-term care programs, and has contributed time and energy worldwide to service in communities.
The Knights of Columbus has grown from several members in one council to more than 13,000 councils and 1.7 million members throughout the United States, Canada, the Philippines, Mexico, Poland, the Dominican Republic, Puerto Rico, Panama, the Bahamas, the Virgin Islands, Cuba, Guatemala, Guam and Saipan.

“The Birthplace of American Liberty”

The Statue of John Parker in Lexington, MA
The Statue of Captain John Parker, stands in the foreground of the Lexington Battle Green, the site of the first battle of the American Revolution, April 19, 1775.
Located just north of the historic Lexington Battle Green, the Knights of Columbus is located at 177 Bedford Street. Within this historic districts your guests will enjoy a tour of American History at its very beginning, the roots of the United States of America.
A perfect setting for you to book and hold your special event. 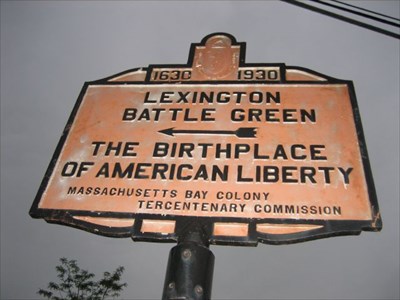 It was here, on the morning of April 19, 1775, that “the first blood was spilt in the dispute with Great Britain,” as George Washington wrote in his diary. In this first skirmish, 77 Minutemen (local colonists who had volunteered to be first responders to military and other threats) faced British Regulars. Eight Minutemen lost their lives and 10 were wounded. Two British soldiers were also injured. After the battle, Samuel Adams exclaimed to John Hancock, “What a glorious morning for America!”
Where it is: Lexington Center is at the junction of Massachusetts Avenue and Bedford Street (Rt. 4/225). 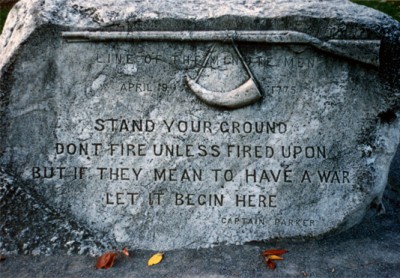 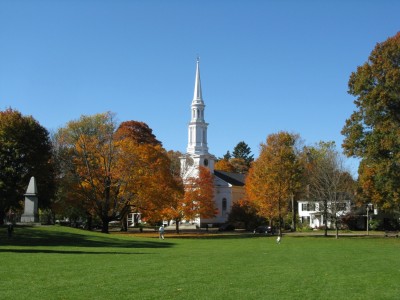 Erected in 1900, this statue by Henry H. Kitson memorializes the Lexington Minutemen.
Where it is: The statue is located on the Lexington Battle Green. 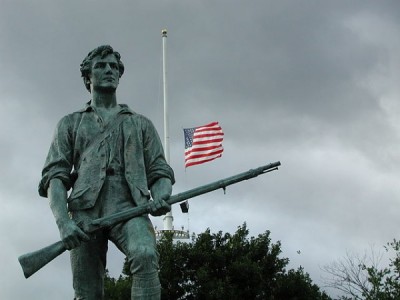 Completed on July 4, 1799, on what was originally the site of the Town’s first schoolhouse, this first monument of the Revolution is the oldest war memorial in the country. The remains of the colonists slain in the Battle of Lexington were moved here in 1835 from their common grave in the Old Burying Ground.
Where it is: The monument is located on the Lexington Battle Green. 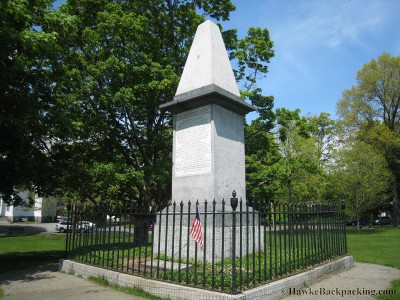 The gravestones on this site, dating from 1690, are the oldest in Lexington. Buried here are Capt. John Parker of the Minutemen and the British soldier wounded on the British retreat from Concord on April 19, 1775 (who died three days later, at the Buckman Tavern).
Where it is: The Old Burying Ground is located off Massachusetts Avenue, west of the Lexington Battle Green. Walk in from Harrington Road at the stone marker next to the church. 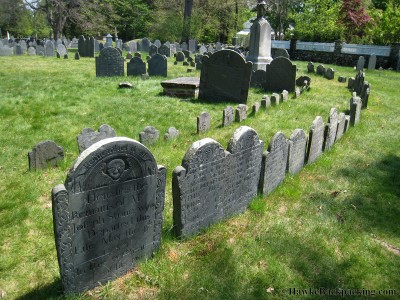 Three pre-Revolutionary buildings administered by the Lexington Historical Society are open to the public seasonally. Fee charged. For details on dates and times, visit the society’s website or offices at the Depot Building (13 Depot Square), or call 781-862-1703.

The oldest tavern in Lexington. Here, about 77 Minutemen gathered in the early hours of April 19, 1775, while awaiting the British regulars. The tavern was licensed to serve drovers in 1713, and served as a place for churchgoers during the Sunday nooning. The interior today is much the same as it was when the tavern was the headquarters of the Minutemen.
Among the many items on display is the Tavern’s old front door with a bullet hole from the 1775 Battle of Lexington. To the left of the tavern is the Memorial to the Lexington Minutemen of 1775, erected in 1949, and containing the names of the Minutemen who died on the Green in the first battle of the Revolutionary War. The inscription reads “these men gave everything dear in life Yea and Life itself in support of the common cause.”
Where it is: The Buckman Tavern is located across from the Lexington Battle Green at 1 Bedford Street.
Phone: 781-862-5598. 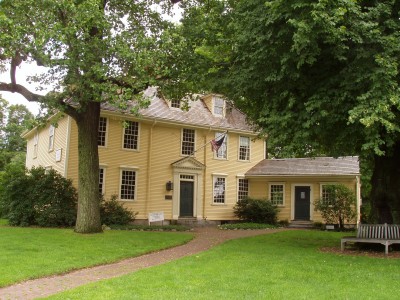 More than 300 years old, this former tavern served as a temporary headquarters and field hospital for British Brigadier General Earl Percy and his 1,000 reinforcements on the afternoon of April 19, 1775. Fourteen years later, President Washington dined at the tavern when he visited the Lexington battlefield in 1789. The tavern contains artifacts from his visit and many articles used by the Munroe family when they ran the tavern from 1770 to 1827.
Where it is: The Munroe Tavern is located at 1332 Massachusetts Avenue.
Phone: 781-862-1703. 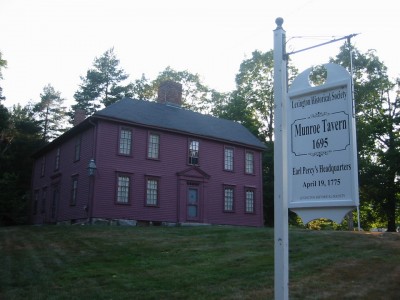 Home of the Hancocks and the Clarkes, this house was the destination of Paul Revere on the night of April 18, 1775, as he and William Dawes rode from Boston to warn the sleeping Samuel Adams and John Hancock (first signer of the Declaration of independence) of the coming of British troops. The house contains period furnishings and portraits, William Diamond’s drum, and the British Major Pitcairn’s pistols. A barn behind the Hancock-Clarke House serves as the Society’s Fire Equipment Museum.
Where it is: The Hancock-Clarke House is located at 36 Hancock Street.
Phone: 781-862-1703. 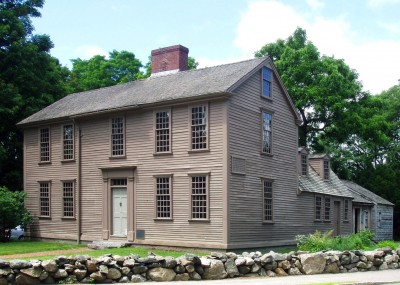 Originally built on its present site in 1762, the Old Belfry was moved to the Battle Green in 1768. From there the bell summoned people to worship, warned them of danger, tolled on their deaths, and sounded the alarm of April 19, 1775. After the original structure was lost to fire, this exact reproduction was built in 1910 on the Belfry’s original site on Belfry Hill.
Where it is: The Old Belfry is located at Massachusetts Avenue and Clarke Street. 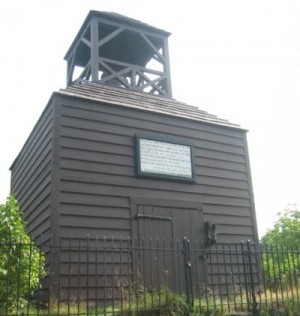 Open 362 days a year, the Visitors Center offers information and hospitality to visitors. On display is a diorama of the Battle of Lexington, created by William F. Buckley, former assistant director of Cary Library and hostage in Iran for over a year before his execution. The Visitors Center also contains a gift shop and restrooms.
Where it is: The Visitors Center is located across from the Battle Green at 1875 Massachusetts Avenue.
Phone: 781-862-1450. 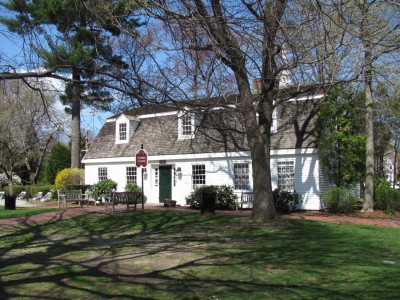 The memorial’s five granite markers are dedicated to the memory of those who served aboard the ships that have been named “Lexington”. The USS Lexington ship’s bell is on display at the Lexington Visitors Center.
Where it is: The memorial is located adjacent to the Visitors Center. 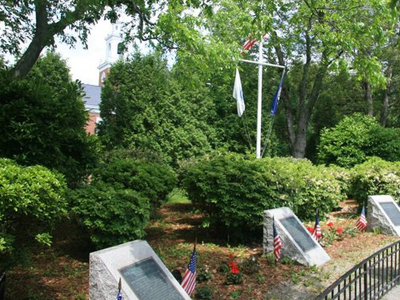 Built in 1847, the Depot Building was once the social center and ceremonial heart of Lexington. At one time, as many as nineteen trains stopped there each day transporting passengers to and from Boston. This historic building has been renovated to serve as the headquarters of the Lexington Historical Society as well as a museum and community center.
Where it is: The Old Depot is located at Depot Square.
Phone: 781-862-1703. 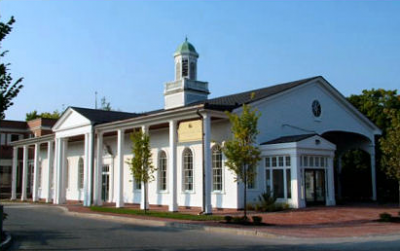 Founded and supported by 32° Scottish Rite Freemasons in the Northern Masonic Jurisdiction of the United States of America, the museum showcases exhibitions on a wide variety of topics in American history and popular culture. The ongoing exhibit “Sowing the Seeds of Liberty: Lexington & the American Revolution” is designed to stimulate new ways of thinking about the battle at Lexington on April 19, 1775 as told through the eyes and voices of the people who shaped our nation’s struggle for independence. The museum also features a library with archives for research on historical events. The museum sponsors many events each year, including the Heritage Music Series, lectures, educational and cultural programs, and special weekend events. Museum admission is free; special programs and events may have fees.
Where is it: The Museum is located at 33 Marrett Road.
Phone: 781-861-6559. 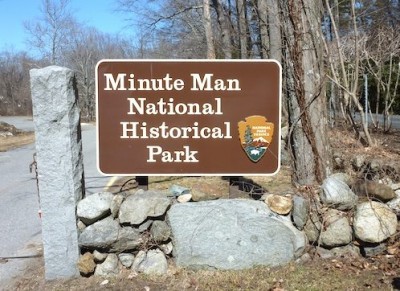 Operated by the National Park Service and located within the Massachusetts towns of Lexington, Lincoln, and Concord, the Park preserves and protects the significant historic sites, structures, properties, and landscapes associated with the opening battles of the American Revolution and interprets the colonial struggle for natural rights and freedoms. Today, Minute Man consists of over 900 acres of lands that wind along original segments of the Battle Road used on April 19, 1775. At the Park’s visitors center, experience a multi-media theatre program on the Revolution, exhibits, and book store. Free admission, open daily.
Where it is: The Park is located on Route 2A.
Phone: 978-369-6993.

This company was formed to honor the memory of the original Minute Men, so that current and future generations will appreciate the significance of the 1775 Battle of Lexington. Each member of the company researches and portrays one member of the brave unit that faced British soldiers on April 19, 1775. The company participates in ceremonies, parades, and reenactments, including the annual reenactment of the Battle of Lexington, which takes place every April.
Read more at lexingtonminutemen.com 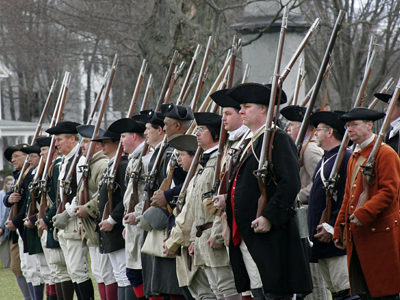